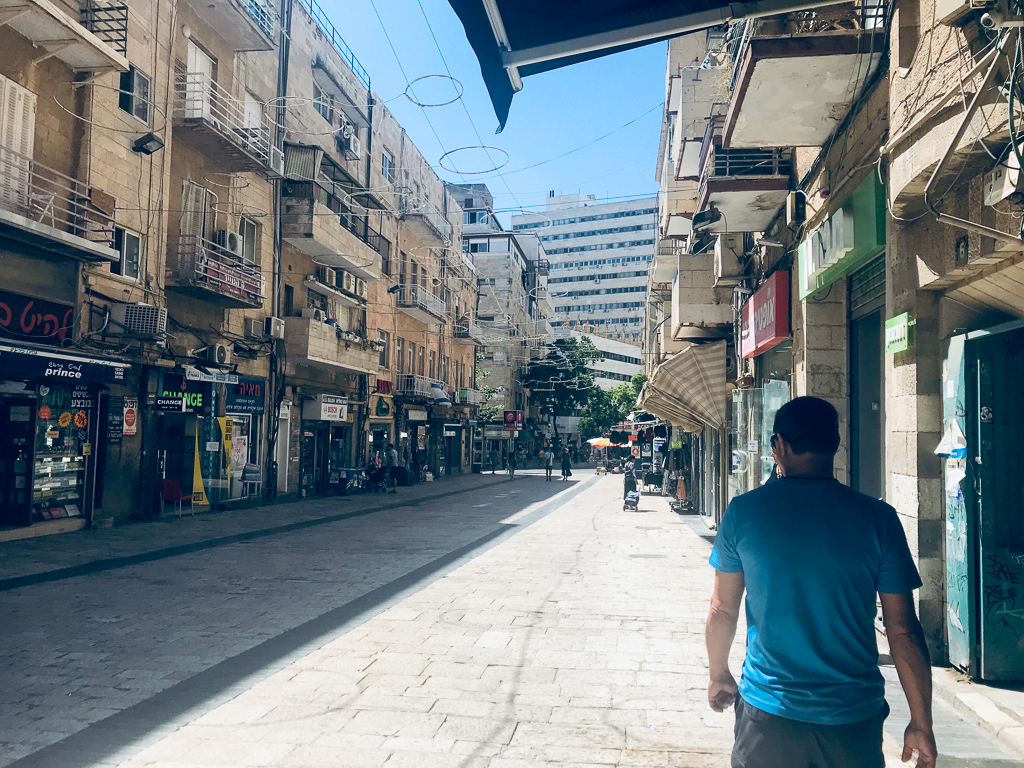 I can’t believe this is our last day here. The time flew by and I had mixed emotions on leaving. As I was packing early this morning, all the things I have learned about the culture started coming back to me.

This morning we get the opportunity to visit the pastor’s parents, George and Betty’s apartment, in Jerusalem. Paster Allen was kind enough to get a bunch of taxis to the hotel and then gave the address to each of them.

There were about 25-30 of us that grabbed taxis. Me and Dewayne grabbed one and discovered our taxi driver drove like he was in New York City. My knuckles were white the whole time while riding with him. He was awesome! Loved to talk and was very friendly. All I could think about was that he should talk less and concentrate more on his crazy driving.

We arrived at George and Betty’s apartment around 9am. We went up the elevator to their floor and was warmly greeted by Betty. Looks like we were the first ones there. She directed us to a table where we signed in (so they could keep track of all the people that visited).

After all of us arrived, George and Betty talked about what they did for the ministry here. They translated books from English to Hebrew. They talked about their hardships dealing with the implications of working with different third parties, book distribution, etc. As I looked at the dining room table, there were about 30-40 books they have had translated already. What a huge deal! Then they talked about their first time here in Jerusalem with Derek Printz and securing the apartment we were currently in, about their neighbors, etc. I really like George and Betty a lot. Such sweet people that love God!

After we hopped back into taxis and made it back to our hotel, we had a few hours free time left, so Dewayne and I headed off with many others to go shopping on the nearby Ben Yehuda Street. We wanted to get some Christian-based gifts but soon discovered that was a little harder than we thought. Apparently, those types of gifts were extremely hard to find. We finally did find a shop that had some stuffed way in the back away from view. Hiding them perhaps? Hmm…

Dewayne was struggling with some kind of upper respiratory thing. Some friends of ours on the tour were sweet enough to give him some medication to alleviate the symptoms. Seems like whatever Dewayne took, it didn’t help. It’s not fun being sick in a foreign country. Can I hear an amen?

Another interesting thing is the music we heard all over the place. There were musicians around every corner (like in Nashville) but the music was very different from what us Westerner folk expect. I heard a lot of Klezmer music (Jewish), but also some jazz mixed with middle-eastern influences. Here is one video I took while walking the streets shopping.

After shopping, we had a meeting at 5pm at our hotel to go over the final instructions to leave. We had to put our luggage on the bus by 6pm and then we went into the dining area for our last, and wonderful meal in Israel. I am going to miss the food here. The vegetables and fruits are so fresh! And who actually has honeycombs dripping with honey? Apparently Israel does. The watermelon was probably the best (or at least in my opinion). It was lightly sweet, juicy, temptingly red and delicious. The fresh olives was a new thing for us. We must have tried several new varieties. The dates were awesome. I considered those dessert. Yummm!

Right after dinner, we boarded the buses to head to the airport. Tito joined us as he lives in Tel Aviv, same city as the airport. We were all so quiet. Many of us were coming down with head colds and other traveling sicknesses.

Why didn’t I want to leave?! My heart was heavy for some reason. I felt a huge pull toward Jerusalem for whatever reason. Maybe the Holy Spirit? Could be.

At the airport, it was chaos as everyone heading toward different flights to get back to the states. Dewayne and I were guided by Tito (apparently he knew the airport well) to the airport security line, and it was so long!

At this point, everything became a big blur. Little did I know, I was coming down with something (like a severe head cold) which would haunt me for 10+ days after I got back.