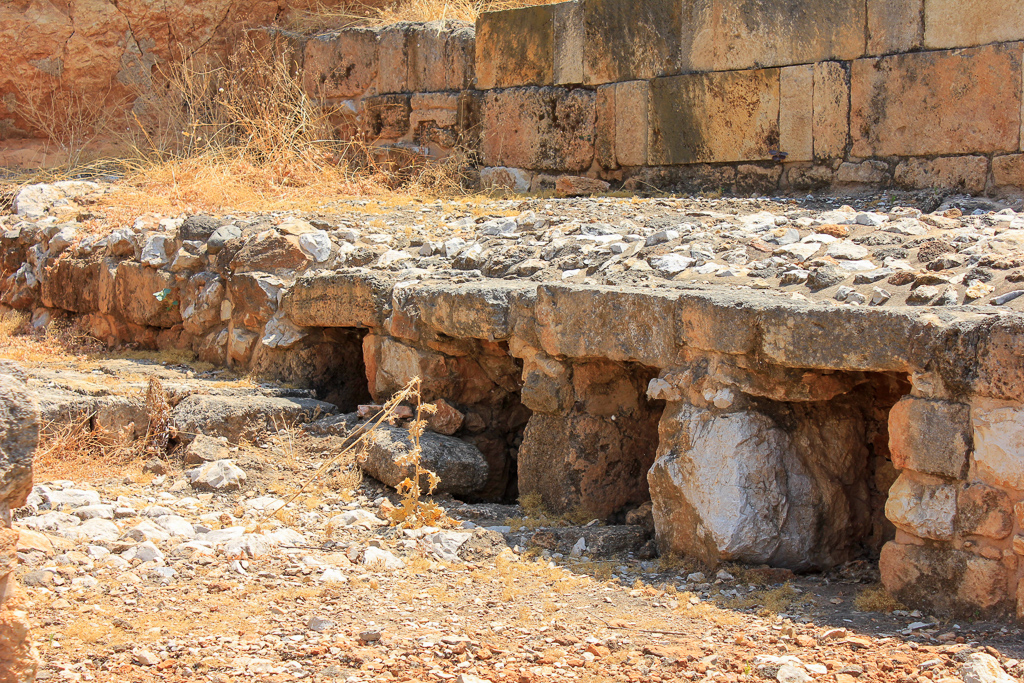 On day five of our tour, we started off the day at Mount Bental Lookout. This is a military base located near Merom Golan (Golan Heights). On the way there, our guide, Tito, explained that the land isn’t fertile due to the fact it is volcanic. Occasionally we saw piles of stones out in the fields and asked what those were. Tito told us those are grave markers.

There were Eucalyptus trees planted near some of the abandoned military bunkers. There were also cows in the fields used to detect leftover mines from the previous war, Yon Kippeur (1973).

Mount Bental has great panoramic views of the Golan and even Syria but also because Mount Bental was the site of a courageous battle fought during Israel’s war for the Golan (Yom Kippeur – 1973). We walked to the top to see spectacular views and then got iced coffee at the cute cafe. There are also bunkers (used to be an old military base) that were open for us to walk in.

Once done at the Mount Bental Lookout, we headed NE 26 km (16 mi) to Caesarea Philippi (also Hermon Stream Nature Reserve). Caesarea Philippi is the location of one of the largest springs feeding the Jordan River. Apparently known as Baal Hermon and Baal Gad in the Old Testament period, this site later was named Panias after the Greek god Pan who was worshiped here.  There is no record of Jesus entering the city, but the great confession and the transfiguration both occurred in the vicinity of the city (Matt 16:13), then known as Caesarea Philippi.

Here, we came together as a group (all five of our buses) and Pastor Allen talked a little about that area. Dedicated to god of Pan (fertility), the word panic derived from this place. Pan was described as half goat and half man and is also described as Satan.  Greek placed temples here where there was worship of springs (also known as Paganism). The pagan worshipers thought this place to be the cave or gate to hell. On a happy note, this area may also be the road to Damascus where Paul was converted by Jesus.

When Jesus came to the region of Caesarea Philippi, he asked his disciples, “Who do people say the Son of Man is?”
Matthew 16:13

After visiting Caesarea Philippi, we headed west 5.4 km (3.5 mi) to Tel Dan Nature Reserve. This is an archaeological site of ancient city, first occupied in the neolithic era. Tel Dan means “Judge.” This place is significant for several reasons:

We hopped back on the bus and was told we would have a little bit of time before our next stop at the Arbel cliffs (Arbel Nature Reserve). We travelled southeast 74 km (46 mi) to Arbel, Israel. On the long trip down, we were exhausted and fell asleep. Even Tito was silent almost the entire way down.

At Mount Arbel there are caves dug into the slopes which were the hideouts for the Jews who fought against the Greeks and Romans. These were extended in the 17th century by the Druze, but the original caves are documented to date back to the Second temple period. At the top, you can see as far as the Golan Heights, and Israel’s tallest peak at Mount Hermon.

It was a little bit of a climb to the top, but totally worth it. The views were spectacular and I was overwhelmed by the beauty of it all.