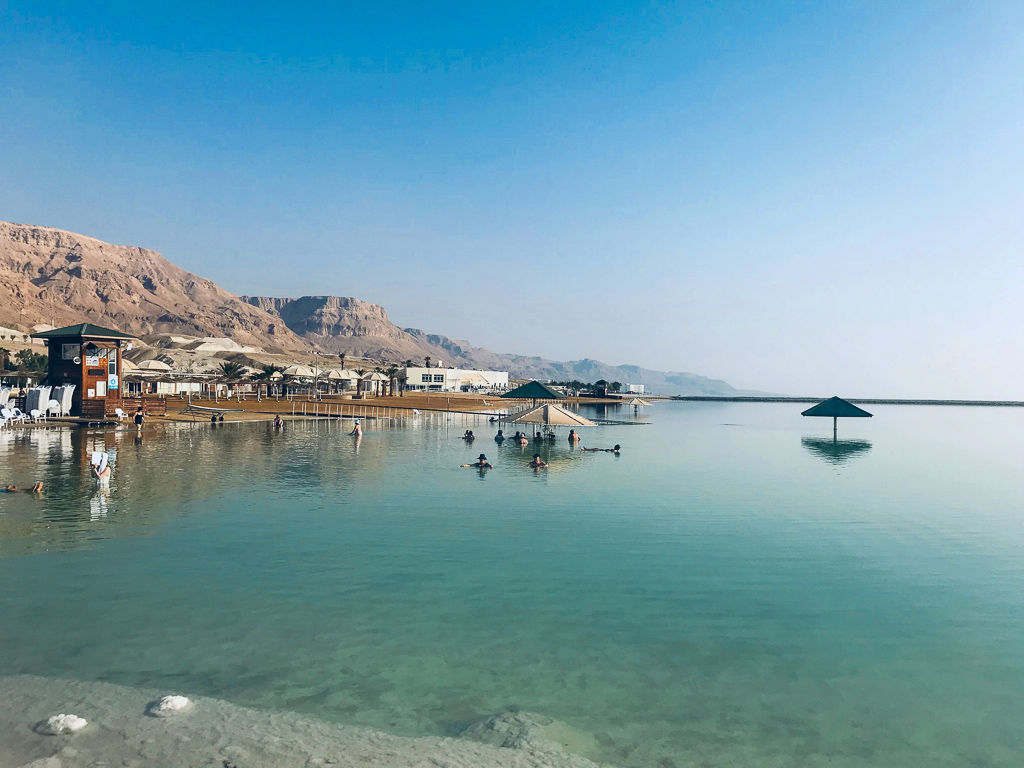 This morning we packed up our bags as we will be leaving Leonardo Plaza (Sea of Galilee in Tiberius) and heading south around 40 km (25 mi) toward the Dead Sea. Last night, we walked the streets of Tiberius and visited several shops and explored street vendors. I tried on a dress, but it was too hot to wear so I put it back. Dewayne ended up buying a pair of $5 flip-flops for the Dead Sea as we hear that there may be sharp salt formations in the water.

As we were traveling to Beit She’an, we were right next to the Jordon border. Guess what? It was peaceful.

Beit She’an is an old Roman city, now in ruins and was being excavated (1920’s and in the 1980’s) to reveal a series of temples from the Middle and Late Bronze Ages. Pompey and the Romans rebuilt Beth Shean in 63 BC and it was renamed Scythopolis (“city of the Scythians;” cf. Col 3:11). It became the capital city of the Decapolis and was the only one on the west side of the Jordan. It was destroyed on January 18, 749 by an earthquake, leaving the city in its current ruins.

They put his armor in the temple of the Ashtoreths and fastened his body to the wall of Beth Shan.
1 Samuel 31:10 (NIV)

Large crowds from Galilee, the Decapolis, Jerusalem, Judea and the region across the Jordan followed him.
Matthew 4:25 (NIV)

Stop 2: The ride down to Qumran

After Beit She’an, we got on the bus and headed south 99.4 km (62 mi) to Qumran in the desert. We took hwy 90 and rode south along the Jordon border. Along the way we passed by Mount Gilboa. We saw tons of date palms (madjool dates) growing in the desert. How the heck are they doing that?! Israel is on top of it with technology. Never seen anything like it. Tito told us that they are pollenated manually by humans. In fact, we saw a lot of workers in the desert on ladders doing something.

We started passing through the Judean desert and through the mountains of Moab (where Naomi from the book of Ruth was from). Then we passed by Jericho. We were not able to get to it (roads don’t go through there anymore), but saw it easily from our bus windows. Right outside of Jericho we saw the location of where it was thought Elijah was taken up to Heaven in a chariot of fire. This spot is significant, as it will the place Elijah will return to anoint Jesus in the end days (this is coming soon). Also, an interesting fact, we were in the same desert that the Israelites wandered in for 40 years. Wow! How miserably hot and dry this area was. It was 104 degrees outside at the moment!

It’s near lunch time and we are hungry. We get to Qumran (finally) and stop at the Dead Sea Visitor’s Center & Restaurant and it is apparently very popular since it’s one of the few places in the desert for us to eat. After we eat falafel balls and all the trimmings, we check out the visitor center and all the ruins and caves.

Qumran is where the Dead Sea Scrolls were found

In 1947 local Bedouins discovered a clay jar containing 7 scrolls in a cave (see photos below) about 1.5km from Qumran. The ancient scrolls were sold to antique dealers and after changing hands several times they reached scholars who could accurately evaluate the age and value of the parchments. Further exploration uncovered a total of 972 texts including the oldest known existing copy of the Old Testament. The texts are written in Hebrew, Aramaic, Greek and Nabataen. The scrolls are believed to have belonged to the Essenes sect. Some of the scrolls describe the tenants of the sect and their particular slant on Judaism. In all there were 12 caves where scrolls and fragments of parchment were found.

The scrolls are now housed in the Shrine of the Book at the Israel Museum in Jerusalem (we visit this place near the end of our tour) where they are kept at the optimal temperature and humidity conditions to preserve them for the future.

After our visit to Qumran, we headed south further into the desert, following the Dead Sea, for 70 km (43 mi) and arriving at Herod’s Hotel at the Dead Sea around 3:45pm.

The Dead Sea isn’t talked about much in the Bible except for barriers. An advancing army of Ammonites and Moabites apparently crossed a shallow part of the Dead Sea on their way to attack King Jehoshaphat (2 Chronicles 20:2).  Ezekiel has prophesied that one day the Dead Sea will be fresh water and fishermen will spread their nets along the shore (Ezekiel 47:8).

The Dead Sea is located in the Syro-African Rift, a 4000-mile fault line in the earth’s crust.  The lowest point of dry land on earth is the shoreline of the Dead Sea at 1300 feet below sea level. Daily 7 million tons of water evaporate but the minerals remain, causing the salt content to increase. Nearly ten times as salty as the world’s oceans and twice as saline as the Great Salt Lake in Utah, the Dead Sea is rich with minerals. The Dead Sea Works company on the southwest side of the lake employs 1600 people around the clock to harvest the valuable minerals from the water.

Tito (our guide) gave us these instructions:

All my life (since I was a small child) I wondered what that would be like, and I got to experience it finally. What was it like? It was triple-digit temps outside, and when I stepped into the water, I was surprised to feel how hot it was (think hot bath water) with a slick-like feel on my skin. The sand was gritty, mixed with salt particles, and hurt my feet (well, maybe the scorching hot sand) when I took my flip-flops off. To float, I went into the water up to my thighs and then tucked my knees and leaned back. The sensation of floating was surreal, as I am used to sinking in water. I didn’t have to paddle or anything. I just floated.

Our paster, a huge handful of people from our group, me and Dewayne, floated in various intervals (remember, we could only be in the water for up to 15 minutes). While on the beach, I did see a couple covered with mud from head to toe. I wanted to take a photo, but thought that would make them and me feel awkward.

Its western border was the Jordan in the Arabah, from Kinnereth to the Sea of the Arabah (that is, the Dead Sea), below the slopes of Pisgah.
Deuteronomy 3:17 (NIV)

After getting out of the Dead Sea, we rinsed off in the showers on the beach, then headed in to take another shower then headed down to dinner and found the buffet was probably the best one yet! There was fresh fruits (oh my gosh, the Watermelon was to die for), fresh dates, radishes, cucumbers, stuffed artichokes with meat, fresh olives, raw and cooked fish, salads of all kinds, and fresh cheeses.